So… here’s the summary data for week 1 of NSH being free: 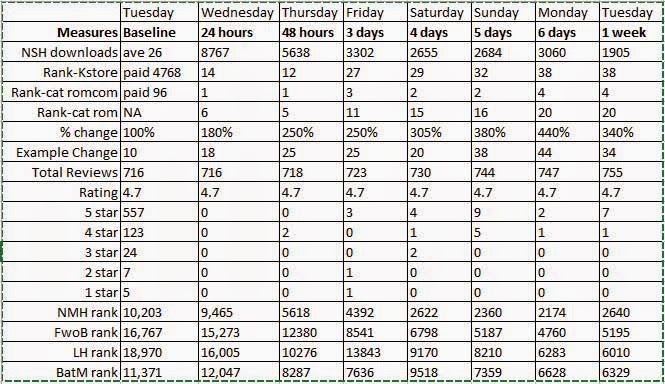 1) NSH has been downloaded 28,011 times since making it free one week ago.

3) The “Example Change” measure: I decided not to include actual numbers of paid downloads because I
don’t want people to focus on how many downloads my books have per-day; I
want people to focus on the % change over time (increase or decrease). Therefore, I used “10” as the baseline representation of 100% because it is a nice, benign round number.

If books 1.5-4 in the series were selling 10 books (total) per day, they are now selling (as of today) 34 books per day since making NSH free.

If NSH’s rating were based on these new reviews only, NSH’s average rating would now be 4.4 instead of 4.7

5) All promotion thus far has been “free” and done entirely via facebook and social media. In June I hope to do promotions via various websites (paid promotion) to determine how effective each of these websites actually are in spreading the word about free books (verses social media).
I’m interested to see what the data looks like over the next month, whether the % change for books 1.5-4 in the series remains above the baseline over time or if it starts to drop… I’ll keep you posted. 🙂